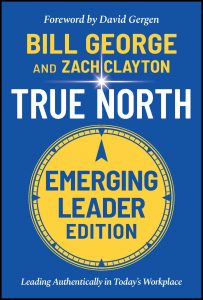 The first two decades of the 21st century have careened from one crisis to the next.
At their core, these tragic events can all be traced to failed leadership. …this is a calling to you as emerging leaders of the next generations—Gen X, Millennials, and Gen Z—to step up and lead authentically by discovering your True North and following your North Star to make this world a better place.
Bill George, Zach Clayton:  True North: Leading Authentically in Today’s Workplace, Emerging Leader Edition

This Friday, I will present my synopsis of True North: Leading Authentically in Today’s Workplace, Emerging Leader Edition by Bill George and Zach Clayton.  Bill George has been riding this horse for quite a few years.  And, this book is an updated version of his earlier edition/first edition of True North.

The premise is clear:  a leader needs to know his/her true north, building on that moral compass that drives all decisions and informs every aspect of his/her leadership approach and style.

We are surrounded by examples of leaders, and people, who seem to be missing this true north; this moral compass.

As I write this, the world of chess is roiled by a cheating scandal.  And, a fishing tournament official has just cut open the winning fish to discover weights and fish filets in the winning catch.  Cheating!  And a poker tournament winner has just been discovered cheating with some kind of signaling device.  (Did you ever see the movie Goldfinger?)

These individual acts of unethical, immoral, cheating, are repeated in business described in many accounts in the book.  The obvioius ones, like Enron are easy to remember. But the times that corporations settle “with no admission of wrong-doing” are seemingly everywhere present.

And, where are the leaders in such circumstances?

It seems to me that corporate boards should bring in Bill George for a day of training with every new CEO.  The new CEO should be required to read Mr. George’s book, write and submit a thorough book review, and then make a pledge to be an ethical, human-centered, moral, leader.  And then, the boards should hold their leaders to that pledge.

Of course, this assumes the board members are ethical, moral, concerned about the big picture – the people in the organization; the community served by the organization — not just the next quarter’s balance sheet.

And, it would help if we could figure out a way to get Wall Street to back off on their usual “next quarter” metrics that seem to almost beckon cost-cutting and rule-breaking.

I’ve read a lot of books that deal with these issues.  Most recently, The Man Who Broke Capitalism:  How Jack Welch Gutted the Heartland and Crushed the Soul of Corporate America—and How to Undo His Legacy by David Gelles.

But, this much is clear:  leaders who do not have a moral compass produce organizations that fail to nurture human beings.  And the results can be so disappointing. At times…horrific.